I created these two characters for the recent Character Creation Contest on the Artist Forum at Comicvine.com
The brief was to "create a character (human, human hybrid, monster, creature, robot, whatever your like) based on reptilians (lizards, cocodriles, alligators, snakes, turtles, etc)."

I came up with SALAMANDER and his side-kick KID GECKO. 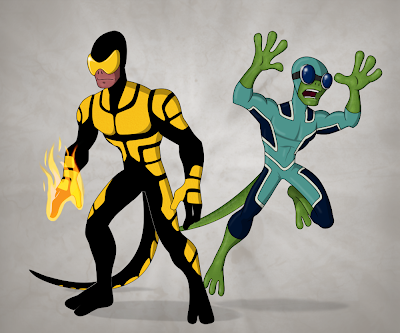 In a world where reptiles evolved along side apes, Homo Sapiens and Homo Reptilia live side by side and both species have their heroes.

SALAMANDER can create and manipulate fire. He is also impervious to the effects of fire and extreme high temperatures. His side-kick KID GECKO has the ability to adhere to virtually any surface and has enhanced agility.