I took part in the recent Remake/Remodel thread at Whitechapel on Freakangels.com. There is some great art by some great artists there.
Here are the instructions we were given:

Many of our first childhood exposure to ancient mythologies came via mainstream Superheroes, appropriated from the same. Thor, Hercules and others: for millions of people the Spandex Supers were a gateway-drug to forgotten cultures. I want to know what would’ve happened if Marvel or DC had picked a very different deity to crowbar into their heroic continuities. How would she look on the spinracks of today?

In Egyptian mythology, Sekhmet (also spelled Sachmet, Sakmet, Sakhet, Sekmet, Sakhmet and Sekhet; and given the Greek name, Sachmis), was originally the warrior goddess as well as goddess of healing for Upper Egypt. She is depicted as a lioness, the fiercest hunter known to the Egyptians. It was said that her breath created the desert. She was seen as the protector of the pharaohs and led them in warfare

During an annual festival held at the beginning of the year, a festival of intoxication, the Egyptians danced and played music to soothe the wildness of the goddess and drank great quantities of beer ritually to imitate the extreme drunkenness that stopped the wrath of the goddess—when she almost destroyed humankind.

Your job is to redesign, revamp, reinvent, remake and remodel this character into something that would work for the 21st Century.

This was my version of the character: 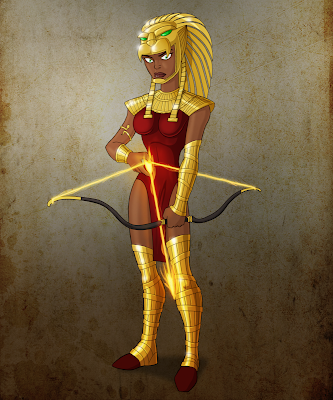